VR unshackles us from the rectangle

Since the invention of TV, that rectangular box is what we are used to looking at, and it’s like a prison. It’s restricting. Even the S8 with it’s smooth, infinite edges, is just a portable rectangle, limited by it’s geometry.

It represents freedom to maximise the natural potential of our brain to absorb and appreciate multiple stories at the same time.

VR also has two fundamental strengths. These are presence and immersion.

Of course, there’s a danger that traditional filmmakers and content producers will fall back on on the 2D, linear techniques that they already know. This isn’t entirely a surprise, but it’s limiting and won’t squeeze the potential out of the much-needed content for VR. This new medium requires a rethink. Stories won’t be “told”, they will be “experienced”.

Over the past year, CNN has experimented with VR, producing more than 50 news stories in high-quality 360 video, giving viewers a deeper understanding of the devastation of Aleppo, a front row view of the U.S. Inauguration and a chance to experience the thrill of skydiving — in total, generating more than 30 million views of 360 content on Facebook alone.

VR as a cure

Exactly because of it’s ability to create immersion and empathy, VR has been officially sanctioned by the US government as a treatment for PTSD. Currently found at over 60 sites, including VA hospitals, military bases and university centers, ICT’s Virtual Iraq/Afghanistan exposure therapy approach has been shown to produce a meaningful reduction in PTS symptoms.

And VR can even be considered a kind of miracle. Take for instance work at the WAP (Walk Again Project) where patients with spinal injuries used brainwaves to simulate walking a virtual avatar via an Oculus VR headset. 8 of the 11 participants were actually reclassified as ‘partially paralysed’, regaining bladder control, and some feeling in previously dormant limbs.

If this can be accomplished, can you imagine the real-world impact of VR on traditional learning and development in talent management?

However, in 2016, only 6.3 million headsets shipped worldwide, (excluding Google Cardboard). Yet 3.5 billion people have access to the web. So consumers aren’t buying it because it’s not yet a comfortable experience, and it has a serious image problem because of the complexity around technology. With the multiple platforms and hardware, and giants like Google, Apple and Facebook vying for domination, there’s also a lot of fragmentation, and this is off putting for many consumers too (remember Blu-Ray and the optical disc format wars?). Lastly, VR is a long way from the intuitive point-click nature of the web.

“I do have impossibly high standards” — Kate Winslett

One answer to this, perhaps, is WebVR. WebVR is an open standard that makes it possible to experience VR in your browser. The goal is to make it easier for everyone to get into VR experiences, no matter what device you have. In the same way that Blockchain and Bitcoin are creating new standards disrupting the finance industry, WebVR may be the standard to disrupt the entire internet.

Mozilla and Google have been instrumental in coming up with a W3C specification draft for WebVR which describes support for accessing virtual reality devices, including sensors and head-mounted displays on the Web. It’s not yet a standard, but progress is being made to get it there.

W3C were responsible for the definition of the web standard HTML that we all owe thanks to for providing seamless cross-device experiences, so there’s hope that they will be able to accomplish the same for VR.

How can you get started with WebVR? There are lots of tools available already including Primrose — one of the first WebVR frameworks which acts through listeners and ReactVR — this is currently in a pre-release mode but aims to make use of ReactJS concepts to produce WebVR applications.

I mostly blog about talent management over at TalentBite, but I’m fascinated with new tech, communication formats and the delivery of content, which is why I write about VR. 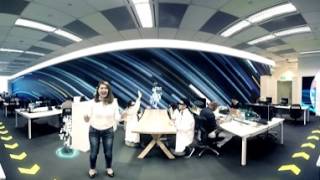